We all live on borrowed time and the debt is too great to ever fully repay. At the very least, we could all strive to find ways to pay interest on it.

Most of my posts are technical, but I've wanted to expand on a post from Raptitude for a long time. In Your Whole Life Is Borrowed Time, David discusses how he felt after hearing about a mass shooting at a place he'd recently visited:

But when I watched videos of eye-witness accounts, including some in front of the church where I tied my shoes and the corner where I nervously loitered, it gave me a vital bit of perspective: I happen to be alive, and there's no cosmic law entitling me to that status. Being alive is just happenstance, and not one more day of it is guaranteed.

This thought instantly relieved me of any angst over that particular day's troubles: technical issues on my website, an unexpected major expense, an acute sense that I'm getting old.

Those problems remained, and they are real problems. But they immediately became only relatively important. They lost their sense of absolute importance. In fact, any personal problem I could think of now seemed to be a small, aesthetic complaint about the grand, mysterious gift of being randomly, unfairly alive that day.

It's fairly cliché to say that we're all living on borrowed time, so it's no surprise how rarely we consider the truth in it (although David is clearly an exception). Many people don't bother at all unless they've experienced a life threatening situation—at least one that felt that way for a moment—or after a close personal loss. Life is fleeting, though, and tomorrow isn't promised. That's as true for ourselves as it is for the people in our lives. Our time to live is an incredible gift card with an unknown balance: we can spend it on whatever we want, but we never know when that balance will abruptly run out. 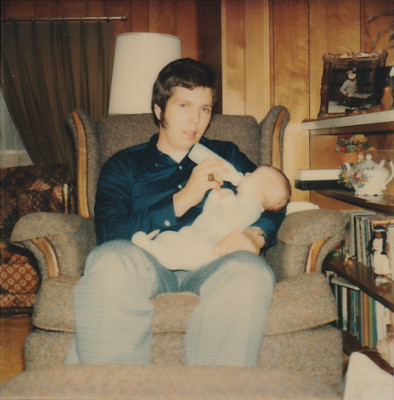 My father feeding me

Even as a child, I was acutely aware that not everyone grew old, and I expected to live a short life. My father died at the age of 25, when I was 5 months old. By the time I turned 21, I recognized that he had a wife and my older brother to support at that point in his life. I also realized that he would've been middle-aged if he'd lived, which felt strange because I'd never imagined him older than he was in photos—much less with grey in his hair or creases by his eyes. When I turned 26, I couldn't help but feel mixed emotions as I appreciated the opportunity of another year while remaining conscious that not everyone gets that.

I was 32 when my 37-year-old brother died from a heart attack. Was it tragic to only get half a life or a blessing to live 50% longer than our father? Whether you see the glass as half empty or half full, the simple truth is that none of it was guaranteed to begin with. Most people expect to outlive their parents, but losing a sibling can catch you off-guard when you're still naive enough to consider yourselves to be young. From that day forward, I would be conscious of the narrowing gap between my own age and the arbitrary number of years he was granted. Then on my 38th birthday, I became older than my older brother. That's not the kind of achievement that makes one proud like the first time you beat him 2 out of 3 games of checkers or realizing that what might've been a lucky streak was actually the beginning of always being able to outrun your older brother.

I'm 41 now, which is a number that reeks of middle age at best. It's also 4 years older than my brother and an incredible 16 years older than my father. When I think about living on borrowed time, those continually increasing gaps are what come to mind. Those years could've belonged to someone else—someone younger, more deserving, or more grateful—but I was the one who lived them. Every passing year and the experiences they deliver feel like one-sided gifts from the universe that I'll never be able to reciprocate. Last month, I watched my brother's oldest daughter walk down the aisle. He undoubtedly deserved that experience more than I did. Yet while I was there, he was 8 years away. People love to talk about how unfair life is, but we rarely bring it up when we're the ones getting the lucky breaks. What would a loved one have done with that time if it had been given to them instead of us?

When we borrow money, we typically repay it with interest. Life doesn't demand anything in return, though. The default option is to squander our years reaping life's rewards without ever giving back. While life hasn't always been easy, I'm not blind to the fact that I've been extremely fortunate. I was born mostly healthy to a supportive family in a first world country. I was given educational and employment opportunities that enabled me to work my way into a career that more than provides for my family. There's no way I could repay the world in full, but I've been considering how I could start paying some interest on my debt to the universe.

What I'm discovering is that it's easy to let life race by and to marvel at how fast it goes, but it's much more difficult to live with intent. Finding the "right way" to contribute or the most fitting course of action to make an impact isn't a simple task. I'm reminded of the Voltaire quote: "the perfect is the enemy of the good." People often avoid doing things due to a desire for perfection when it's far more beneficial to just get started. Beginning is no small feat. I often stack obstacles in front of my dreams to keep them at arm's length: "I'll start on X as soon as I finish Y and Z." Of course, with Y and Z always changing, I may never get around to X at all. That's not how I want this to play out, so I need to be more deliberate in my search and my choices.

You won't be remembered for the good intentions that you never acted on. No one will speak at your funeral about the things you would have done if given a few more years. Your grandchildren won't hear stories about the person you wanted to be. Few of us could ever truly repay our debt to the universe, but we can all afford to pay some interest on it. If you're wondering when to start, it's clearly now since you never know when "later" will be removed as an option.

As for me, I want to stop allowing indecision be an obstacle and accept that no contribution is too small. I'll give blood more often because I hope it saves a stranger's life one day. I'll contribute to open source projects because those projects have a positive impact on others. I'll help people where I can and I'll look for more opportunities to do so. If posts like this inspire others to do the same, then I'll write more of them. Maybe one day I'll find myself with the time and influence to have a larger impact, but these are all things I'm able to do right now without waiting for some perfect time in a future that isn't promised.