Despite existing open source revenue models, even popular projects are facing extinction. Is the free software ride over or is there something we can do?

Open source software powers the modern world. From operating systems to web servers and desktop applications, not only does open source deliver, but it provides truly competitive options. Given the prevalence of free and open source software, or FOSS, why are seemingly successful projects on the brink of collapse? The developers of TrueCrypt laid down their keyboards and walked away. Werner Koch announced that he was unable to justify further effort on GnuPG after 18 years. When critical security vulnerabilities were discovered, the OpenSSL maintainers revealed that they were grossly understaffed with a single full-time employee and averaging $2k per year in donations.

Those three projects alone are likely responsible for over half of the world's secure computing. I won't suggest that all FOSS developers should be rich, but anyone that makes that level of positive impact on society shouldn't have to choose between making further contributions or feeding their family. If there's an upside to these revelations, it's that the problem is out in the open. In response to the GnuPG article, the community stepped up with $135k in donations in a single day plus another $160k from just 3 companies. OpenSSL's announcement led to the Linux Foundation creating the Core Infrastructure Initiative to help fund core open source projects. If this money was available all along, why did we need an emergency to put the money where it belongs? It's time for us to agree that "free" software is about freedom rather than price.

I'm sure Microsoft would cut either company a sizable discount to bring $398 million - $3.52 billion in revenues their way, but the point is clear: free and open source software brings measurable (and immeasurable) value to every company that uses it. Those estimates are for very large companies, but it's only 2 out of thousands and doesn't include .NET or other development tools, database servers, or desktop/office applications. I'm not picking on Facebook or Google here—both companies are known to give back to open source—but putting some numbers out there. There are countless companies and products that simply couldn't exist without the generosity and sacrifice of the open source community. If your company depends on FOSS, then you should care deeply about those projects—not just their profitability or potential extinction, but also how much attention the maintainers are able to devote to it. Don't wait for a project to announce that it's on the brink of collapse before showing your appreciation. 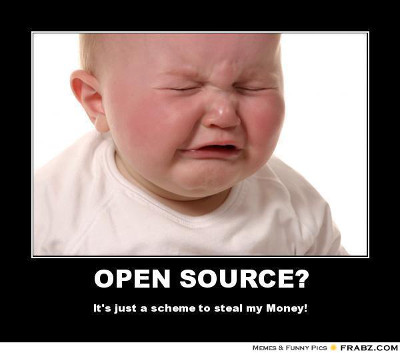 Only buy in if your needs are met.

So how do free and open source projects get most of their funding? The most obvious source is donations, which seem to come up short. Very popular projects like Mozilla Firefox can sell branded merchandise to supplement donations, but that doesn't help small projects very much. As a project grows, funded features can start to drive some revenue. The most financially sound projects offer some combination of professional services such as support, consulting, and training (RedHat), a paid version of their product with extra/early features (MySQL), or software as a service where they charge to put the icing on the cake (WordPress). That gives us a number of ways to support our favorite or essential projects, so let's step up:

These are just a few suggestions, but the key is to stop taking these projects for granted. How you choose to show your appreciation is up to you and will vary based on any number of factors. If you've had success convincing your employer or clients to help fund a free or open source project, please share your approach in the comments below.