For our 2016 vacation, we took a cruise to Jamaica, Grand Cayman, and Cozumel aboard the Carnival Splendor. It wasn't our favorite cruise, but we still had fun.

My family loves to travel and see new places. For vacation this year, we took a cruise to Jamaica, Grand Cayman, and Cozumel aboard the Carnival Splendor. While the ship wasn't great, it still got us to the places we wanted to see. Without finding yourself in a natural disaster, it would be tough to have a "bad vacation" in the Caribbean. 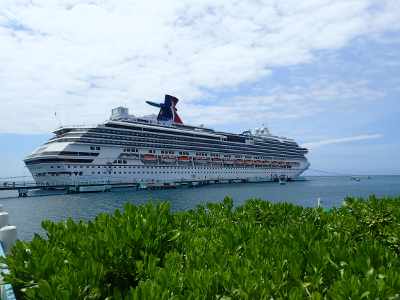 Our ship, the Carnival Splendor

With over 1,500 staterooms, the Splendor is one of Carnival's biggest ships (beaten only by their Dream class ships) and is only slightly larger than any we've ever been aboard. One thing about a ship that size is that you can barely feel the ocean waves—great for people who worry about seasickness. I have to say that I wouldn't recommend this particular ship to anyone, though. Compared to other Carnival ships, we found much lacking on the Splendor including the service, dining options, and activities. Speaking with other passengers, many "experienced" cruisers felt the same way and several first-time cruisers said they wouldn't cruise again based on this experience. 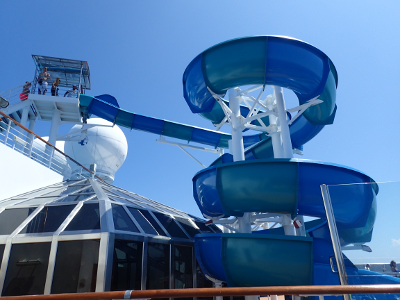 We had two days at sea with no stops, and we spent part of the first sea day relaxing by the pool. The girls miss having a neighborhood pool, so they try to make up for it whenever they have a chance. After swimming some laps together, Crystal conquered the water slide over and over again while the youngster and I acquired mild sunburns—a rookie mistake. Although you're not much closer to the equator, the sun is significantly stronger in the Caribbean than in Georgia. I didn't burn as badly as Ashli since I'd made an effort to get a little sun in the weeks before the trip, but we both had to be generous with the sunblock and reduce our exposure for the next couple of days. 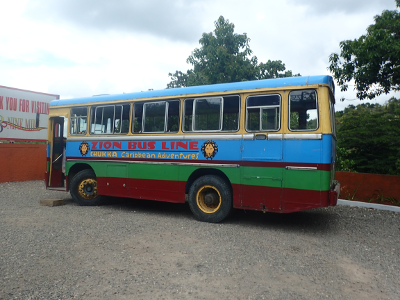 The bus we rode into the mountains of Jamaica

The first stop on the trip was our least favorite: Ocho Rios, Jamaica. We took the Bob Marley Bus Adventure to the village of Nine Mile where Marley was born and laid to rest. It was a long ride, so the bus made a pit stop for a snack and to stretch our legs on the way up the mountain. A woman selling souvenirs had Bob Marley CDs for $10 each or 3 for $20 and said the money goes to a local school, so we bought all three. Without any way to verify her claim, I can only hope the money really goes to the school (this is why I prefer to choose my charities online). Being coffee lovers, we also splurged on some overpriced Jamaican coffee beans that we're not sure were really Blue Mountain. 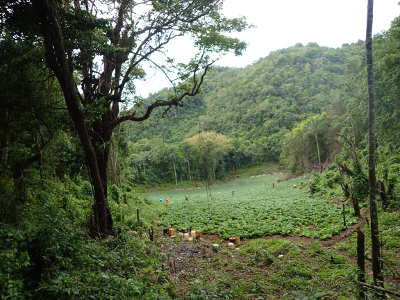 One of the larger farms we passed

The terrain was beautiful along the way with luscious green vegetation lining the hillside. The mountain road was narrow and curvy, which made us appreciate having a local to drive for us. It would've been stressful to make the long trek ourselves driving on the left side of the street and, at times, on a single-lane mountain road with no visibility of what's coming around the corner. It was much more relaxing to sit back and observe the landscape. We saw many Jamaicans hard at work on their small farms growing food to eat and trade. 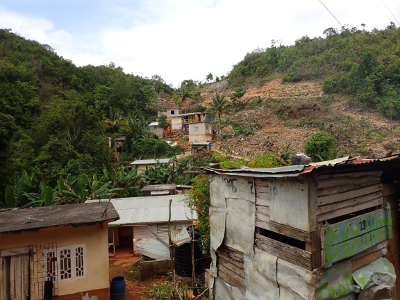 We saw tons of shacks along the mountains

Meanwhile, the small huts and shacks were a constant reminder of what a poor country Jamaica really is. The poverty manifested itself as aggressive behavior from the souvenir salespeople and even some service staff. It's a horrible shame that the money from the millions of tourists who visit every year hasn't made a more positive impact on the overall economy. Still, we passed many friendly locals who smiled huge grins and waved to the bus. Our tour guide was proud to say that the Jamaicans are a very happy and contented people overall—and not only because of the legal weed!

We had planned to scuba dive in Grand Cayman, but we each had our reservations about it for different reasons. Instead, we went to Stingray City Sandbar and Tiki Beach. We'd visited Stingray City Sandbar on a previous cruise, but swimming with stingrays was enough fun that we were excited to do it again. Since the cruise ship is cashless, I was in the habit of not having my wallet with me and left without any cash that day. We were at least able to stay hydrated since water was included in the excursion, but we regretted missing out on the professional photos of us with the stingrays. We still got some great photos of our own, though. It was here that Crystal took what may be my favorite photo from the trip (it's now the desktop background for one of my monitors):

Boats at sea in the Cayman Islands 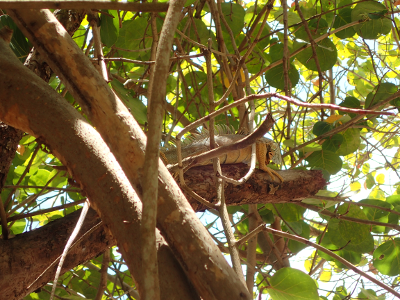 We really enjoyed Grand Cayman and highly recommend it. As you can see in the photo, the Cayman Islands offer some truly spectacular ocean views. Tiki Beach, which is part of Seven Mile Beach, has beautiful white sand made from coral and is lined by ocean water as clear as a swimming pool with a light blue tint. Not one to be left out, Crystal joined the sunburn club during our stay at Tiki Beach. This time, we did almost everything right: she'd applied generous sunscreen on a regular basis but didn't think about turning her back to the wind as she sprayed it. 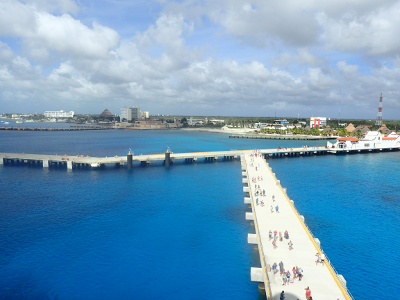 The port in Cozumel as seen from the ship

Cozumel's water is gorgeous with a deep blue tint. One of our favorite things about traveling in the Caribbean is admiring the varied colors of the ocean in different ports despite the fact that the water is so crystal clear in all of them. I've never seen the Pacific Ocean, but my experience with the Atlantic Ocean in the U.S. is that we've polluted and dirtied our waters so much that they don't even compare to what the Caribbean has to offer. 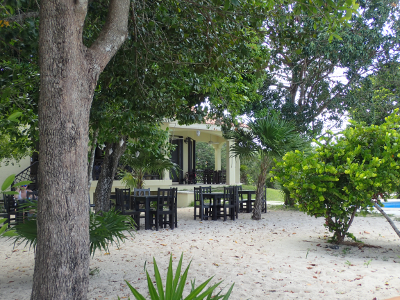 We ate lunch at the table on the porch

We've been to Cozumel on several different cruises, but we always find something new to do. This time, we wanted to avoid making Crystal's sunburn any worse, so we looked for something with some shade. What we found was La Casa en La Playa, which is Spanish for The House on The Beach. It's exactly what it says and you have access to the amenities of the house: lounge chairs under natural shade or umbrellas, hammocks, snorkel gear, and a swimming pool in case you prefer it to the ocean. There's also a full staff including a chef to cook your Mexican lunch, a bartender, and a host who constantly brings fresh, cold drinks around. 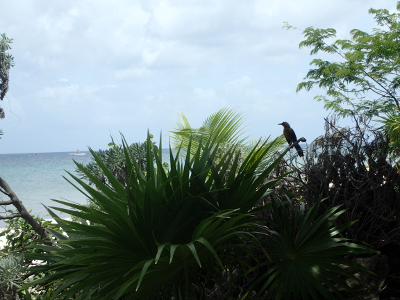 We felt very pampered at La Casa en La Playa. It was the perfect place to avoid overdoing it in the sun while still appreciating Cozumel's fantastic scenery. The staff provided beach shoes since it was a bit rocky in the water, but we were more interested in lounging around and being lazy that day. We met a nice couple from Alabama sitting by us on the beach, so that gave us the opportunity to chat while savoring margaritas from the bar. The "home cooked" lunch was tasty and they had no problem whipping together a vegetarian dish for me.

This trip was very relaxing and the sights were incredible. While we'll probably never visit Jamaica again, we've decided that we'd like to spend a week in the Cayman Islands one day. It's made its way to our list of favorite spots in the Caribbean. If you've visited any of these places, let me know about your experience in the comments below. Of course, I'd also love to hear suggestions for other places to visit!